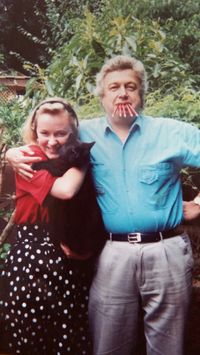 I want to share a few thoughts about my father. Before I do, to put it in context, I feel blessed and supported that my parents brought me into the world and raised me. They are truly good people. I've told them both and meant it, that I won the parents lottery.

My father was a difficult man. He was a perfectionist and obsessive compulsive.  He spent his entire life fretting about worst case scenarios and  anxiously preparing for them. As a result they never happened, but he also never got to enjoy any lasting peace.

The only time I ever saw him at peace was the few hours straight after a good medical test result. He would allow a brief celebration before going straight back into worry. He was also happy working in his garden.

From my perspective, his expectations were never met for long. He quickly became restless again. I felt he loved and believed in me deep down but that I also let him down.  He did not understand my love for music, especially music that wasn't commercially successful. Falling short, for him was labelled often as stupidity. That hurt; it sometimes even still does.

Despite these mental chains that bound him, outwardly in his career he was a successful man. He was also the funniest person I've ever known. He was proud of me, of us. He sacrificed enormously for his family. I loved and miss him terribly. How can all of this be true at the same time? Yet it is.

Human beings are complicated. Life is not easy. There is no perfect family. I am still trying to work all this out.

I'm also trying to understand the suffering on this planet. Most of it by innocent animals and people at the hands of cruel or ignorant people. Especially right now. And I can't. I don't know if I'll ever be able to get my head around it.

This was not the blog I meant to send. I spent this week working on another. But I wrote and re-wrote it until it lost all of its spontaneity...  because I wanted it to be perfect. That made me think of my father. I got that from him and really have to watch it. So I wrote this without thinking too much and I'm sending it instead.

Please stay safe out there and be kind to yourself.

A song for anyone else who also has questions : Middle man

For some much needed comfort and  peace, here's one I made with Paul Adams:  Inhaling Stillness