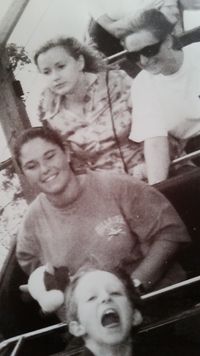 I'm thinking about a friend I met when I first moved to Sydney. Her name is Anita Thomas. She played saxophone, I played trumpet. We used to play jazz songs down at Sydney Harbour.  The thing about Anita is to this day, she is one of the most inspiringly inclusive people I've ever met.

The most extreme example: One day a guy started chatting to us. He seemed a bit hyped but harmless, a bit seedy, lonely. Then he told us that he had literally just finished a  20 year jail sentence, as in the day before. 'What did you do?'   'Murder'.

And the next bit sounds nuts but Anita didn't blink; she gave him her phone number. NOT because she was interested in him. She wanted to make sure he had a place to stay ( She didn't mean hers... even so, I laughed myself stupid after and teased her mercilessly for about a decade.)
But that was totally normal for Anita. She helped people no matter who they were - a truly open heart. Yet; if you meet her, she's not naive, not a pushover. She's even kind of a hard ass in some ways. But her philosophy is so simple. Until someone shows ugly behaviour, she doesn't judge. Everyone is the same.

So meanwhile.. now in the world, deep ugly stuff is bubbling to the surface. It's shocking.
People who before seemed quiet and unassuming suddenly "can't wait to blow all you haters to pieces". They give vivid violent details. And they're not joking. Others are now proud white supremacists (the ugliest one of all).
Where has it all come from? I realise it was under there hiding all along. That is worrying.  And it made me think of Anita, the straight shooter. There was never anything to bubble up.

The photo: At a quartet gig once at Wonderland,  Anita forced me onto the KIDDIE's rollercoaster. She is the one with sunglasses. I've never been so scared in all my life.

Finally, totally unrelated, here's a new song I videoed at my window. Jealousy

Please take care out there. If you  enjoy what I'm doing, please subscribe to my Youtube channel!