Things that seem meant to be

I do think some things that happen are spiritually meant-to-be. (hearing Steve Winwood's If You See a Chance yesterday right when I did, was one) This was another, in Chicago last weekend. Paul Adams tells this better than I can -
"Something pretty amazing happened the other night on the streets of Chicago. One of those impacting moments. Elizabeth and I heard a guy playing trombone on the corner. He sounded great. Sensitive and articulate. I passed him by, but then crossed the street to listen. We had a long talk after filling his case with gratitude. He spoke of his time with Sonny Rollins and others. His gigs dried up..h...e had lost some front teeth in an accident and it diminishes his playing. But, his twenty five dollar pawn shop trombone sounded warm and perfect. He lives in a place with no electricity. He builds a fire to warm his dog and cats and when too cold, he and the animals ride the back of the train all night to keep warm. He is not bitter. As a matter of fact, his "vibe" was very sweet. He seemed to have no resentment for the folks walking by ignoring him. A ZEN busker.

Elizabeth related as music had some years ago stopped supporting her. She was cooking once a week to save money, eating the same meal each night and buying nothing. Socializing became too awkward. The only job available was in the meat department of a supermarket.. she's a vegetarian.

She and I felt a deep connection with this man. I felt as if I had known him forever. I spoke to him of a conversation I once had with the great singer Minnie Riperton's dad, and what spirit he had despite difficulty. The guy's eyes burst open the size of silver dollars with a smile a mile long and asks, "you knew my dad?!!??" I was wacked. I asked, "Daniel Riperton was your dad?" He said "yeah, that was my daddy." This was Minnie's brother Ray. Small world. We shared stories. I told him about crowd funding, and he said he is so out of touch he doesn't have email. We exchanged info and I hope he gets an email address through the library or friend. All three of us felt a very deep connection. It felt like a moment that was meant to be." 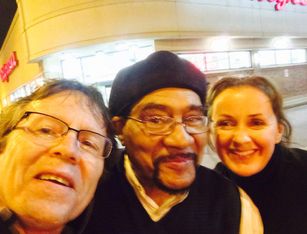