Hello at this crazy time. 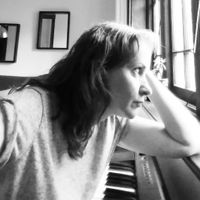 I hope you're doing well during this rocky time.

Here's my news. Since we locked down, I've sadly done NO horn playing because the park where I practice is still full of people and I'm in an apartment so I'm waiting for people to go back to work..

So  meanwhile I'm honing songs, pretty much all and every afternoon (and staring out the window). Which is a lot more fun than it sounds, actually it is keeping me sane. Here's a rough song video ..  I hope you enjoy!

By honing, I mean basically taking 10 songs and stripping them back to bare bones, getting rid of props, distractions, extra notes. The plan is that when nothing is left except the song itself and the story can really breathe, I record it. Maybe my priorities are all ass about, but this is something I always dreamed of doing and never had time until now.

It also comes off the back of a painful lesson.

In 2018 I decided to record my 5th album at home, instead of a studio for the first time, with someone else overseeing every aspect. I was excited. I've always loved being part of the recording and producing process. Paul Adams, who does this brilliantly ( here's an example), was and still is, excited too. He helped get me set up.

I worked on it every day before I went to work. But my mistake was this: because it was fun, I assumed it was also easy. So I went down the rabbit hole stubbornly, happily, on my own and a year or so later, thinking it was close, I finally heard it for the first time in a room on proper studio speakers.

Straight away I could hear it was wrong. Too busy, too much, tangled.  I didn't even know how or where to start fixing it.. it would be like untangling a giant knot of wool. It felt like hitting a wall -  an excruciating let down. I ate humble pie.

(Paul says it's only a mixing issue.. still unconvinced, but it will be great if he turns out to be right.)  It hurt like hell for months and I still can't quite face them yet, but I learned from it .

I have HUGE respect for musos who create great listening albums from their living rooms. So here I go now with 10 different songs just in case I turn out to be wrong about the other lot. This time nothing but the BARE BLOODY SONG. That's it. All I know is it feels right, I'm still excited, though hopefully in a more sober, flexible, open minded way this time and I've got nothing to lose.